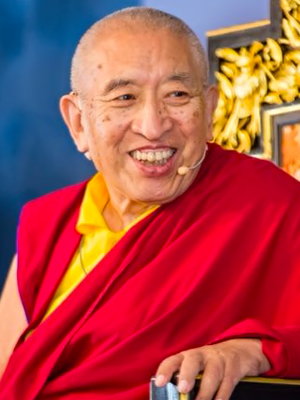 The 9th Khenchen Thrangu Rinpoche was born in November 27, 1933 in Kham, Tibet. He is a recognized master of Mahamudra as well as a great scholar with a vast knowledge of Dharma.

The present ninth incarnation was recognized at the age of four in 1937 by the Gyalwa Karmapa and Palpung Situ Rinpoche, who prophesied the names of his parents and his place of birth.

From the ages of seven to sixteen he studied reading, writing, grammar, poetry and astrology, memorized ritual texts, and completed two preliminary retreats. At sixteen, under the direction of Khenpo Lodro Rabsel, he began the study of the three vehicles of Buddhism while staying in retreat.

At the age of twenty-three, he received gelong ordination from H.H. Karmapa, along with Chogyam Trungpa Rinpoche and Surmang Garwang Rinpoche. He was introduced to the Absolute Nature by Lama Khenpo Gangshar Wangpo. At the age of twenty-seven he arrived in India and, under orders from H.H. Karmapa, went to Rumtek Monastery in Sikkim. At the age of thirty-five he was given the geshe examination on sutra, tantra, and the Kagyu tradition in the presence of 1500 monks, all of different sects, in Baksa, India, and was given the degree of Geshe Rabjam.

Upon his return to Rumtek he was named Khenpo (abbot) of Rumtek and the Kagyu sect. Since then, he was chosen to educate the four great Kagyü regents including H.E. Tai Situ Rinpoche, H.E. Jamgon Kongtrul Rinpoche, and H.E. Gyaltsab Rinpoche. Thrangu Rinpoche, along with Khenpo Tsultrim Gyamtso Rinpoche, he serves as the head Khenpo of the Nalanda Institute for Higher Buddhist Studies at Rumtek Monastery.

Thrangu Rinpoche has dedicated much of his life to educating the thousands of young people who have been placed in his care. About five hundred years ago, when the seventh Gyalwa Karmapa Chodrak Gyatso (1454-1506), visited the region of Thrangu in Tibet, he established Thrangu Monastery and enthroned Sherap Gyaltsen as the first Thrangu Rinpoche, recognizing him as the re-established emanation of Shubu Palgyi Senge, one of the twenty-five great siddha disciples of Guru Padmasambhava.

Kenchen Thrangu Rinpoche has traveled extensively throughout the world bestowing teachings and empowerments to dharma students and has centers in Europe, the United States, Canada and Asia. In Nepal, He established Four Foundations Retreat Center, Sekhar Retreat Center and Kha Cho Ling Retreat House. He also built his own shedra (college) and school to eduacate young monks and nuns and lay children.